You are here: Home / soup / gnocchi and sausage soup 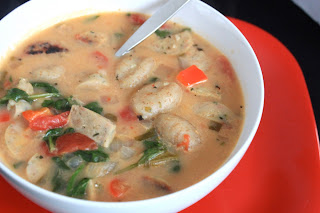 I made this soup a few weeks ago, but I’ve been waiting for the perfect time to share it with you.  Until now, I wasn’t really sure when that time would be but now it is clear.  The leftover turkey is gone, the remaining stuffing is too mushy to eat anymore, and you’ve polished off the pies.  You’re craving something comforting yet somewhat healthy to balance out the past two days of indulging, and you don’t want to spend much time in the kitchen.  That’s where this soup comes in.


It’s a soup that comes together pretty quickly, involving a little bit of chopping and browning of the meat, with the rest of the ingredients tossed in and slowly simmered to bring together all of the flavors.  There are so many great things going on in this soup, from the fluffy gnocchi to the spicy sausage and basil flavored cream broth.  You can also play around with the recipe and use kale instead of spinach, or use whatever kind of sausage you prefer: chicken sausage, Italian sausage, turkey sausage, soy chorizo, whatever floats your boat. 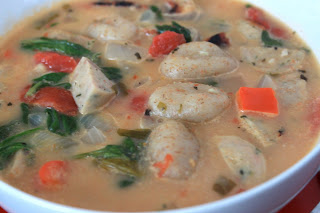 
In large soup pot, melt butter/oil over medium heat, then add onions and bell pepper.  Saute for about 7 minutes, until the onion becomes translucent.  Add garlic and cook for one more minute.  Remove from pot and place in small bowl.  Add sausage to soup pot and cook over medium heat until well done, breaking it apart as it cooks.  If you’re using pre-cooked chicken sausage, I would just cut into small pieces and cook it until it’s heated and a little golden brown.


Drain sausage of any fat and add onion and pepper mixture to sausage, along with the dried basil, chicken broth, and tomatoes.  Season with salt and pepper.  Over medium heat, bring to a boil and let simmer for 20 minutes.


After 20 minutes, add gnocchi and spinach, bring to a simmer, and cook until the gnocchi start to float to the top.  Check package of gnocchi for cooking time.  Finally, add half and half and simmer for another 5 minutes.  Finish with Parmesan cheese.  Enjoy!