You are here: Home / dessert / strawberry and rhubarb crisp 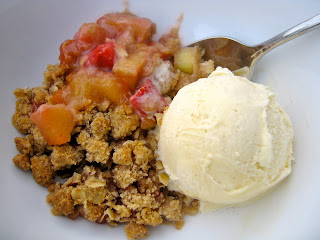 When I was younger, I thought that I hated rhubarb.  Whenever my grandma Esther would make rhubarb crisp, I would crinkle my nose and say “no thanks” because for some reason I thought the rhubarb would taste like bitter celery.  I had smelled it when I would pick the stalks from my grandma’s rhubarb bushes behind her garden, and I just couldn’t get over that smell. 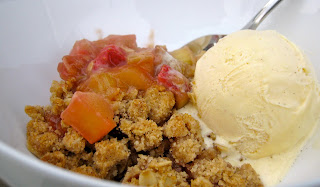 Finally, a couple of years ago I decided it was time to see what all of the rhubarb-fuss was about.  So I went over to my grandma’s house, cut a basketful of rhubarb stalks from her backyard, and went home to make my grandma’s rhubarb crisp recipe.  I can’t believe I missed out on such a delicious dessert for so many years!  The rhubarb was tart, but tossed with sugar and baked with a crumbly and buttery topping made for such a yummy dessert!  Paired with some vanilla ice cream, and I was one happy girl.


Now I try to make the most out of my grandma’s rhubarb garden every year.  For my first rhubarb dessert of the year, I decided to go with a strawberry and rhubarb combination as I have seen these two paired together all over the blog world.  What a delicious combination it was!  I also based this crisp off a lightened up recipe from Cooking Light and I didn’t even miss the extra butter and sugar.  Plus, less butter and sugar means you can eat more, right? 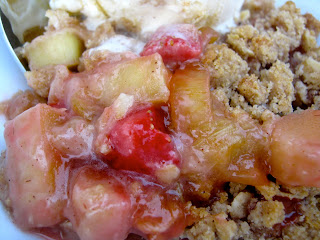 
Preheat oven to 350 degrees F.  Spray 9×13 baking dish with baking spray.  I used a round casserole dish, which worked just as well.


For the filling, mix together the rhubarb, strawberries, sugar, and cornstarch in a medium bowl.  Pour into prepared baking dish and set aside.


Make the topping by whisking together the flour, oats, brown sugar, cinnamon, and salt.  Drizzle the melted butter over the dry ingredients and stir to combine.  It doesn’t need to be smooth, just mixed so the ingredients are incorporated, and form into large pebble sized pieces.


Sprinkle the topping evenly over the filling.  Bake for 35-40 minutes in preheated oven.  Remove from oven and let cool at least 10 minutes before serving.