You are here: Home / chicken / spinach and artichoke dip pizza 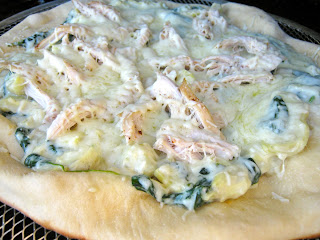 “Are you gonna blog about that?”


I can’t count the number of times I have heard that from people since starting this blog.  I guess I don’t really know if I’m going to blog about a certain recipe until it’s made and tested.  I definitely don’t blog about everything I make.  Take the corn chowder I made last week.  It wasn’t necessarily a failed recipe, but it just wasn’t something I would encourage other people to make.  I’m definitely not making it again, so why would I tell other people to make it?

In the middle of making this pizza this weekend, my Uncle Mike and Aunt Molly stopped by for a drink and, as expected, Mike asked “Are you gonna write about that and put it on your site?”  I said probably, but as usual, I wasn’t really sure how the concept would turn out.  He told me if I did I had to write about him.  Well, here I am writing about him, because after the very first bite I knew it was success.
I not only want to write about this pizza, I want to tell the entire world to make it.  It’s got spinach and artichoke dip with some shredded chicken, on top of a chewy pizza crust.  Then it’s topped with more cheese.  I mean, seriously…so, so good. 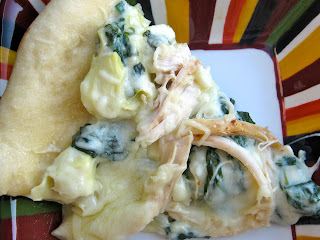 
Preheat oven to 450 degrees or light grill.  I used the grill.


Prepare pizza crust as directed.  *If using a homemade crust or crust made from a mix, you will want to pre-cook the crust in the oven for 5 minutes or on top of the grill for 3 minutes so the middle of the pie does not become mushy with the toppings on it.


In large skillet or pot, heat olive oil over medium heat.  When oil is warm, add onion and cook until translucent, about 5 minutes.  Add garlic and cook one more minutes.  Add flour and stir to mix with onions, then slowly whisk in heavy whipping cream followed by the milk, salt, and red pepper flakes.
Lastly, stir in parmesan cheese until combined.


Place spinach in microwavable bowl and microwave on high for 1 minute.  Spinach will wilt slightly.  Add to cream mixture, and stir until it is completely wilted.  Add artichoke hearts and stir to combine.


Spread spinach and artichoke cream mixture onto prepared pizza crust.   Top evenly with shredded chicken, followed by Italian cheese blend.  Bake in preheated oven for 9-11 minutes, or until cheese is golden brown, or on a pizza screen on the grill for 5-7 minutes (check every couple of minutes to make sure bottom is not burning).


Cut into slices, and enjoy.