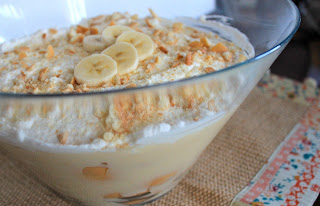 Wow, I’m on major a sweets kick, aren’t I??  If you didn’t know any better, you’d probably think I only ate blueberry muffins, pumpkin bars, and rice krispie treats this past week.  The truth is, I’ve been having some major fails in the kitchen lately.  Everything I have made has either come out “just okay” or “I need 3 glasses of water with this meal to choke it down.”  Yeah, it’s been pretty bad.  I feel really bad too because it’s not just me that has been affected by this, but Marc has too.  The poor guy needs a decent meal!  This week I’m going to try really hard to be on my A-game in the kitchen but for now…more sweets!

Last weekend we had some friends over for dinner, which ended with this deeeeeee-licious banana pudding.  I got this super cool glass bowl at Ikea a few months ago and have been dying to use it for some sort of creamy, trifle-like dessert.  Unfortunately, I probably shouldn’t make desserts that need this ginormous bowl when I’m making it just for myself.  Having dinner guests was just the occasion I needed!

I’ll admit, instant pudding has its time and place.  However, there is nothing that can compare to a homemade pudding.  Not only is homemade vanilla pudding richer and creamier than instant, it’s actually pretty easy to make!  This classic banana pudding dessert consists of sweet vanilla pudding in between layers of crunchy vanilla wafers and silky bananas.  It is comfort food at its finest. 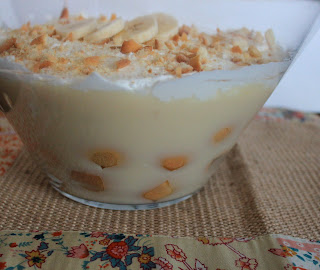 By the way, do you all like my new look?  I decided it was time for a greens & chocolate makeover, and I love how it turned out!  Another new feature: a Recipe Index.  Yay for trying to be organized!

In medium saucepan, combine milk, sugar, cornstarch, vanilla, salt, and eggs.  Whisk well to combine.  Place over medium heat and cook until thick and bubbling.  This takes about 10 minutes.

Once thick, remove from heat and add butter.  Stir to combine and melt butter.  Pour into a separate bowl, cover with plastic wrap, and let cool about 10 minutes.

To make the whipped cream, whip the heavy cream with the vanilla and powdered sugar until soft peaks form.  Spread or dollop over banana pudding.  Top with more crushed wafers.