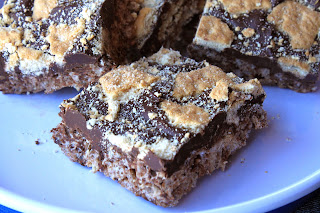 This past weekend Marc and I headed up north to his parent’s cabin for a nice little getaway.  It involved everything a weekend getaway should include: sleeping in, good food, just a little exercise, a lot of laziness, and quality time spent with the one you love.  For us, this included watching a thunderstorm roll across Lake Superior, an attempted blueberry picking hike (the blueberries aren’t ripe yet), a nice run along a wooded trail, pancakes for breakfast, grilling out, and three games of Monopoly.  Yes, three.  We are a competitive pair and couldn’t help but play a championship game.  Don’t judge.
One thing we didn’t get to do was have a campfire.  Maybe it was because the black flies were out in full force this weekend.  Maybe it was because we were two and a half games deep into Monopoly and couldn’t tear ourselves away from it.  We’ll never know.  All we do know is that we didn’t get any s’mores!  I felt the need to make up for it on Sunday morning by making a big pan of these s’mores rice krispie treats.  I hate to say it but, I think I actually like these better than an actual s’more.  Don’t get me wrong – there’s nothing better than a charred marshmallow between some graham crackers and chocolate.  But you can’t deny the convenience of these bars.  And the deliciousness.  Definitely can’t deny the deliciousness. 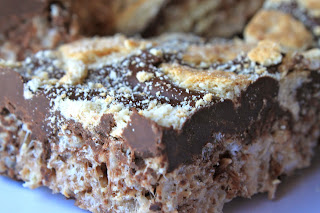