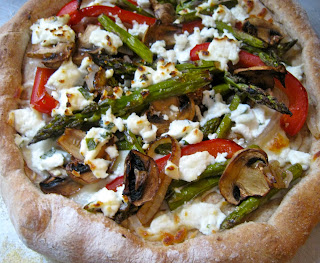 My friend Amy is a fabulous cook and lately she’s been raving about the pizzas she has made.  Her combination of toppings are pure genius and she has been experimenting with grilling them to get the perfect crispy but chewy crust.  All of her talk about pizza combined with my bounty of vegetables from this weekends farmer’s market, made for the perfect opportunity to try my hand at making pizza.


I knew I wanted to use the goat cheese I had also bought from the farmers market, and had a roasted vegetable pizza in mind.  I started by roasting a red pepper, a bundle of asparagus, some mushrooms, and an onion until they were caramelized and starting to get a little crispy.  Then I simply added them to the pizza crust with some mozzarella cheese and goat cheese.  So simple.  So good!  Now, if you need pizza sauce on your pizza, I’m sure you could add some to the crust before the rest of the ingredients, but I honestly didn’t think it needed any. 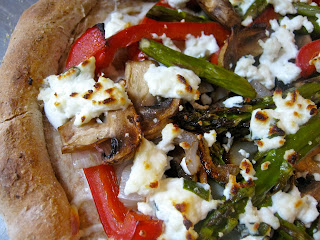 I had some extra time on my hands, so I decided to go all out and make the crust from scratch too.  I was a little nervous about this, because I haven’t had the greatest luck baking with yeast, and even bought a back-up “Just Add Water” mix, just in case.  To my surprise, it actually turned out really good and didn’t have that “yeasty” taste the rest of my bread projects have had.  The only thing I would do different would be to roll the crust out thinner to make a bigger and thinner crust with more room for more toppings! 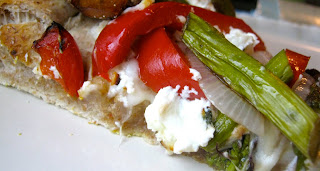 
In mixing bowl, combine yeast and warm water.  Let sit for 10 minutes, or until mixture becomes bubbly on top.


Add salt, sugar, and oil to mixture, and with dough hook on electric mixer, gradually add the flours.  Once they are combined, increase the speed and knead for 3 minutes.  The dough should be in a ball and there should be no remaining dough on sides of bowl.


Transfer dough to separate bowl that has been well oiled (or take dough out of original bowl, oil original bowl, and place dough back in bowl to cut down on the number of dirty dishes.  Cover dough with plastic wrap or towel and let rise at room temperature until it has doubled in size, about 2 hours.


After 2 hours, take dough out and cut into portions and roll out to desired thickness.  I cut mine into 2 equal portions to make 2 medium-large pizzas.  I think mine could have been rolled out more, and if I had it would have made 2 large pizzas.  The original recipe stated to roll the dough to 1/4″ thickness.


After rolling dough to desired thickness, make crust by folding in around the edges and pressing dough back on itself.


Sprinkle cornmeal onto baking sheet (or pizza stone if you’re fancy) and place dough on top of it.  Cook dough without toppings for 10 minutes.