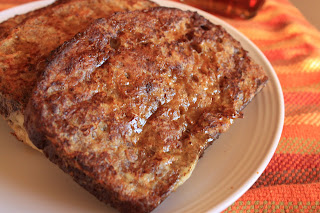 I bet I had you sitting on the edge of your seats wondering what I made for breakfast with the pumpkin bread, didn’t I?  Okay, so probably not.  I have a feeling it was pretty obvious that I used it for french toast. I mean, what else could I have done?  Put in an omelette?  Yuck.  Crumbled it up, covered it in milk and eat it like a bowl of cereal?  Sick.  Wrapped a sausage link with it?  Hmm…not a bad idea actually.  But using it for french toast is a way better idea.


Not only is this french toast made by dipping the slices of pumpkin bread in a cinnamon, egg, and milk mixture and frying them in butter, but they are baked in the oven to give them a souffle-like texture.  The result is the classic crispy-like outside with a light and fluffy inside, full of pumpkin spice.  The great thing about this bread is that it’s meant to be used with bread that is a couple of days old.  This means that when you’ve eaten half of a loaf of pumpkin bread and want a reason to eat the other half for breakfast, your problem is solved! 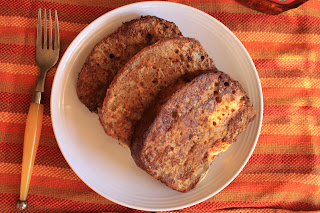 
Dip each slice into egg and milk mixture, letting it soak on each side for 15 seconds.  Place in heated skillet and brown each side, about 1-2 minutes on each side.


Once browned, place on a baking sheet.  Bake in preheated oven for 13-15 minutes.