You are here: Home / main dish / pumpkin and caramelized onion macaroni and cheese
Pin It 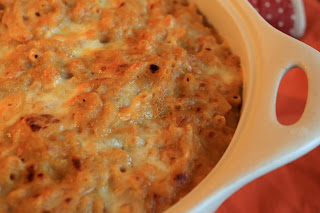 Last week I was sitting in the therapy gym working with a patient, just like I do every day of the work week, when all of a sudden a co-worker came through the door and says to me “pumpkin and cheddar mac and cheese.”  Apparently The Rachael Ray Show had been on TV in a patient’s room and she happened to catch the cooking part of her show.  Later that day we were still talking about the pumpkin mac and cheese, so I went on The Rachael Ray Show website and printed off a couple of copies for us. 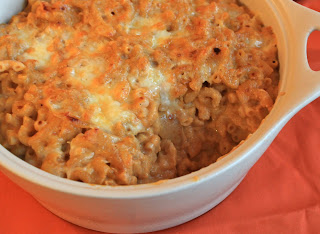 
After onions are done, bring a large pot of water to boil.  Add pasta and cook until al dente.  Also preheat broiler.


While pasta water is cooking, add remaining 4 tbsp butter to skillet with onions and melt over medium heat.  Once butter is melted, whisk in flour and cook for 1 minute.  Then add beer.  Reduce until almost evaporated, then add maple syrup and milk.  Season with allspice, nutmeg, mustard, cayenne pepper, and salt and pepper.


Cook until sauce is thick enough to coat back of spoon, about 5-8 minutes.  Whisk in pumpkin and 2 cups of the grated cheese.  Once melted, add cooked pasta into sauce and stir to completely combine.  Pour into casserole dish and top with remaining 1/2 cup of cheese.  Melt cheese under broiler until golden brown. Watch carefully!