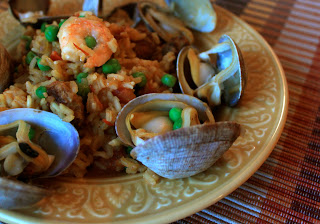 So thanks to you, my lovely readers, I made it to the second round of Project Food Blog!  After I found out at work on Friday afternoon (and did a little happy dance), I took a closer look at the second challenge…”The Classics.”  The idea for this challenge is to choose a classic dish from another culture, with ingredients that are outside of my comfort zone.  As soon as I read this, I was so overwhelmed with choices and suggestions from helpful family members and friends that I had absolutely no idea what to make.  To  make it even more difficult, the challenge was due in 2 days which meant I needed to get cookin’!
So what exactly went through my mind when deciding what to make for this challenge?  Let me take you on a journey through my food blogger mind….
The first idea that was suggested to me was sushi.  In my mind I was like “No.  Yes.  Wait, no it’s too hard… but that’s the point of a challenge.  Yes, I’m making sushi.”  But making a decision so fast and easy like that just isn’t my style, so within an hour I had already begun to brainstorm more ideas.
The next idea was to make gyros with lamb.  I have never cooked with lamb, or really had the desire to, but I thought it fit the idea of “going out of my comfort zone.”  Something about it didn’t seem good enough though.  I have made tzatziki before, so that wouldn’t be too exciting and besides figuring out how to roast up some lamb, there wasn’t much to it than that.  I needed a challenge, people!
The last ethnic cuisine I partially considered was the french cuisine.  Something about it seems so elegant and effortlessly simple, yet I know in the back of my mind that it is definitely not simple.  French cuisine requires time…lots and lots of time.  So while the idea of a beef bourguignon sounded absolutely delicious (and impressive!), I honestly wasn’t too thrilled about the idea of spending the day inside babysitting my food given the freakishly beautiful weather Seattle happened to have on Saturday.  I know, I’m selfish.
I finally put my mind to ease by deciding to make Spanish paella.  Being in Seattle, there are a handful of fresh seafood markets within walking distance for me, so I decided to take advantage of that for the challenge.  The seafood was the challenging aspect of this dish to me (along with the actual process of making paella, but I’ll get to that later), as I have never cooked with or seen anyone cook clams.  I’m not sure I have even eaten a clam before, so this was a pretty big stretch for me.  However, I was confident that through the power of the internet and a little faith I would be just fine.
The other thing that appealed to me about making paella was that this dish has always looked like such a comfort to eat.  There’s something about a rice and meat skillet dish that reminds me of comfort food, and while paella is not exactly a “rice and meat skillet dish”, it is close.  It’s like the sexier version of a meat and rice casserole. 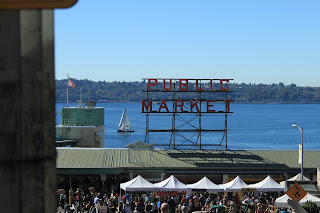 So after making a fun trip to Pike Place Market on the gorgeous Saturday afternoon we had in Seattle, I was ready with my fresh seafood, chorizo from the meat market, and fragrant spices that I needed for the dish.  While it seems like it involves a lot of ingredients to make an authentic paella, it’s definitely worth the effort (and money) to get quality ingredients for the tastiest and most memorable end result.
The process of making the paella was the other difficult part about this dish.  I was a little weary of making it without an official “paella pan” but I doubt that any non-paella-experts could tell the difference.  In addition, it is recommended not to stir the paella while the rice is soaking up the liquid.  This drove me crazy.  I am used to making risotto, which you stir constantly, and I actually enjoy standing over the stove and stirring and stirring and stirring until I can stir no more.  With the paella, I had to remove myself from the kitchen and let the heat do its magic.  After letting it sit and cook, it was time to add the clams.  This involved more self-restraint as the clams are “steamed” by covering the skillet and letting them cook and open up.  Once again, like magic it all worked out and the clams opened! 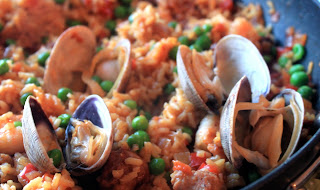 Ta-da!  The paella turned out fantastic and I think the challenge was a success!  I guess I’ll just have to wait to find that out…
Voting opens Monday, September 27th, so head on over to Foodbuzz’s Project Food Blog and vote for me!