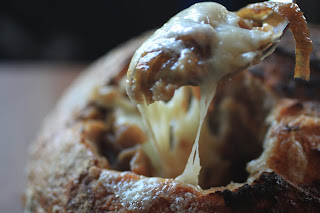 
That’s pretty much what occurred the entirety of the dinner that Marc and I ate this french onion soup.  It was so good that neither of us wanted to stop to breath, nonetheless talk to each other.  There was one point however, during the dinner when I stopped to say to Marc “You’re pretty quiet,” to which he replied “This soup is too good to talk.”  Well alright then.


This soup is definitely a labor of love.  It takes time.  It takes work.  But it is so worth it.  It’s good for one of those Sunday afternoons when it’s noon and you’re wondering what to do with your day because you have nothing planned.  I’ll tell you what you can do.  You can chop up lots of onions and roast them in the oven for a couple of hours.  Then, after the onions are done roasting, you can stand over the stove for about 40 minutes stirring and deglazing.  This might seem like a lot of time but like I said, it’s worth it.  After that, all the hard work is over.  You just let it simmer for another half an hour and it’s ready to eat!  Well, almost ready.  You see, french onion soup isn’t complete without the bread and the cheese.  But after that’s all done, then it’s ready!


I’ve said it already but I’ll say it just one more time: this soup is worth all of the time and effort you put into it.  It is truly delicious!  It goes perfectly with some crusty bread, and I served the soup in a round sourdough “bowl.” I bought the loaf and then cut a hole out of it to fill with the soup, but you can also serve it in bowls, and make the cheese topped giant crouton to put on top of the soup as well(which I have included directions on how to do so below).  So come on, it’s fall which means it’s soup season!  Go make some soup! 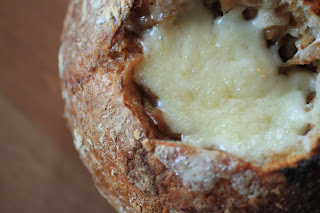 
Place onions on baking sheet lined with aluminum foil, or in a dutch oven heavily sprayed with cooking spray.  Add butter to onions.    If using baking sheet, cover onions with another sheet of aluminum foil.  If using dutch oven, cover with lid.  Put in oven, and let the magic happen.  Come back in 1 hour.


After 1 hour, take onions out, stir them around a bit, then put them back in the oven, covered, and continue to cook for another 1-1/2 hours.  I checked mine again after a half an hour and gave them another stir.


Carefully remove onions from oven.  If using baking sheet, transfer onions to large pot and place over medium-high heat.  If using dutch oven, simply place it over medium-high heat.  Cook for 10-15 minutes, until the onions start to become brown and bottom of pot is covered with brown crust (the crust is a good thing!) but lower heat to medium if you feel necessary.


After 30 minutes, soup is ready to be served!  To serve in a sourdough bowl, hollow out the middle of a round sourdough loaf.  Fill with soup, then top with swiss cheese…shredded or slices works.  Place in 400 degree oven and bake about 5 minutes, or until cheese is melted and begins to brown.  To serve in bowls with giant cheese croutons, follow these directions:


Using sourdough or french loaf, cut into 1/2 inch pieces.  Arrange slices on a baking sheet and bake in 400 degree oven for 8-10 minutes, or until the edges begin to turn brown.  Remove from oven and turn on broiler.  Top each piece with generous about of swiss cheese (1/3 to 1/2 cup).  Place under broiler for 1-2 minutes, or until cheese is browning.  Keep an eye on it to make sure it does not burn.


Top each bowl of soup with a slice of cheesy bread.