You are here: Home / bars / fig and pecan oat bars 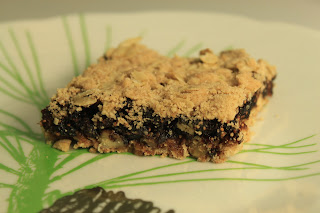 In general, I’m pretty good with my money.  I think things through, weigh the pros and cons of big purchases, and try to make good decisions when I shop.  However, when it comes to gift cards, I tend to be a little impulsive.  It’s like free money to spend on whatever I want at that place!  So a few months ago when I won a giveaway for $30 to The Nutty Guys online store, I pretty much just bought whatever was sounding good to me at that time.  One of the things I ended up buying was a bag of dried black mission figs.  I don’t know why I picked figs and I had no plans of what to do with them, but it sounded like a good idea.

After the purchase I decided to use them in fig bars and even had a recipe picked out and saved, but months passed and I always opted for something a bit naughtier when I baked anything.  Things like chocolate, peanut butter, cookies, and brownies always seemed much more appetizing than fig bars.  This weekend though, I was craving something a little healthier for a sweet treat, so finally the time was right to put my impulse buy to good use and make the fig bars.

I have to admit, I wasn’t expecting to love these bars.  I figured they would be the same concept as Fig Newtons: pretty good and do the trick for a sweet fix, but nothing compared to Oreos.  That said, I LOVE these bars!  The fig filling is gooey, sweet, and crunchy from the figs and pecans, and the crust is crumbly, slightly salty and has a hint of cinnamon.  I even reduced the butter and sugar a bit from the original recipe, and they didn’t disappoint. 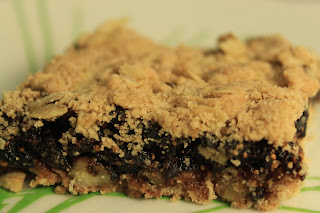 To make the filling: combine the figs, sugar, and water in medium saucepan and bring to boil.  Simmer until the mixture has thickened.  This takes about 10 minutes.  Once thickened, remove from heat and let cool a few minutes.  Place mixture in a food processor and pulse just enough to break them up, about 4-5 pulses.  Return to pan and add 1 tbsp butter, vanilla, and the pecans.  Mix until butter is melted and completely combined.  Set aside.

Firmly press about 2/3 of the mixture into the prepared pan.  Spread the fig filling evenly over the crust with a rubber spatula.  Sprinkle the remaining crust over the filling and press firmly into the filling.

Bake in preheated oven for 25 minutes.  Let cool completely and cut into squares.