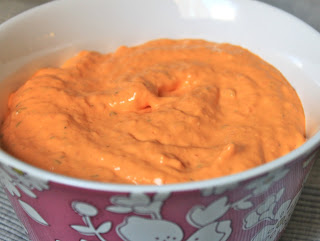 
Day One: Even though both Taylor and Marc are feeling the effects of two weeks straight of “last-time” nights out with friends and days filled with tying up loose ends, packing, hooding ceremonies, and graduation, they are up bright and early for breakfast with Taylor’s family.  After breakfast, they are 80-West bound for Colorado Springs.  They arrive at Cheyenne Mountain just in time to get their tent up before the sun goes down.  After the tent is set up, they realize they are in a reserved (for someone else) campsite, so they transport the entire tent to a new site.  They go on a short night-hike, then call it a night. 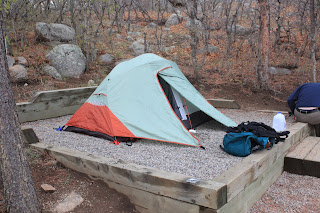 Day Two: Taylor wakes up freezing.  Marc didn’t tell her She didn’t realize she was supposed to zip up the sleeping bag the entire way up to keep the heat in.  Marc tries to make coffee on the portable stove, but can’t get it to work.  After 20 minutes of trying to “figure it out” Taylor mentions she saw a Starbucks about ten minutes away.  Problem solved.  After getting their caffeine fix and making a trip to the grocery store for enough food to feed a family of four for a month, they are on the road to New Mexico.  They arrive at Wild Rivers Recreation Area, set up the tent, and then head out for a 6 mile hike.  For dinner, Marc gets the stove to work and makes macaroni and cheese.  Taylor whips up a batch of her special pudding soup.  They end the day sharing one of Marc’s home brews and watching the sun set. 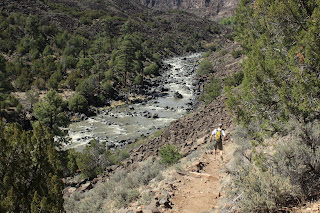 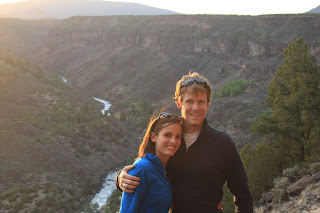 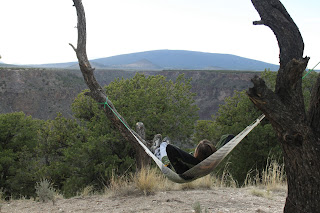 Day Three:  Taylor and Marc have their first fight (of the trip).  Marc adds too much water to the oatmeal and while Taylor doesn’t mind pudding soup, oatmeal soup doesn’t sound very appetizing.  She decides to pass on breakfast, but Marc won’t take no for an answer.  He strains the oatmeal and Taylor reluctantly eats it.  After breakfast, they pack up camp and head to Taos, New Mexico.  They score a sweet (and free!) campsite by the river, then head up to the Taos Ski Valley to hike Wheeler Mountain.  After about an hour of hiking up, they run into some snow.  Marc decides to test it out, and ends up falling through the snow into a stream, soaking his shoes.  While laughing at him, Taylor falls through too.  Defeated and with wet feet, they head back down the mountain and go into Taos for some shopping and Mexican food.  What sounds better after a huge Mexican dinner than another hike?  They hike another hour up a steep trail, then Marc rolls Taylor back down.  If you’re wondering if they have showered at this point, the answer is no. 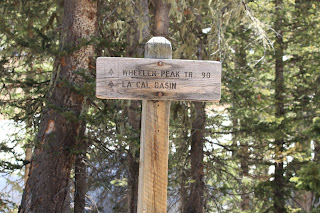 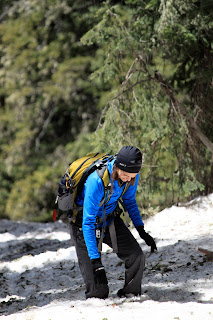 Day Four:  Taylor and Marc get up early to make coffee and get on the road to Sedona, Arizona.  Taylor doesn’t feel too hot today.  Her nose won’t stop running, her throat feels like she swallowed a cactus, and her head feels like a balloon that is about to pop.  While in the car she tries to make herself feel better with peanut butter M&M’s, but then realizes she can’t taste anything.  Little does Marc know, when Taylor is sick and can’t be comforted by chocolate, she gets emotional.  Bright side to not being able to smell anything: she can’t smell her “four days without a shower” body.  They drive for about five hours, then arrive at the Petrified Forest National Park.  Despite 40 mph winds they spend three hours at the park, blown away by the beauty of the petrified wood and multi-colored badlands, and the rich history of the petroglyphs and ruins.  After the park, they drive to Sedona.  Taylor is terrified when they drive into snow in Flagstaff, a mere 20 miles away from where they are camping.  After contemplating spending the night in a hotel, Marc convinces Taylor the experience will be worth the memory and they set up the tent in the rain. 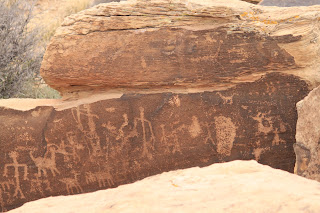 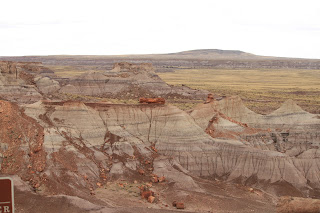 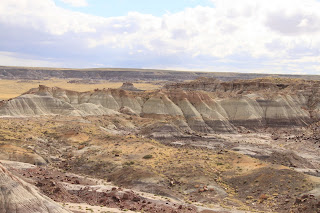 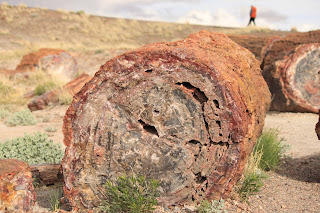 Day Five:  Taylor wakes up feeling better!  They start the day with Starbucks coffee and a beautiful 7 mile hike.  They break for lunch and it starts raining.  They don’t let the rain hold them back, and hike another 6 miles.  They reward their selves with happy hour margaritas and a huge plate of nachos.  Just because they sleep in a tent at night doesn’t mean they can’t eat at a restaurant.  After happy hour, they head to a prime spot to watch the sunset.  About fifty other people had the same idea.  Despite some clouds, it was still a beautiful sunset.  Still no shower. 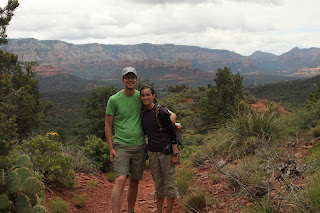 Day Six: Marc’s 28th birthday!  They attempt to wake up early to watch the sunrise but apparently the sun gets up at 5 a.m. in Sedona.  Still, they are up by 5:30 and hike up a small mountain to watch the mountains get the first sunlight of the day.  Plans for the day include hiking and showering!  To be continued…. 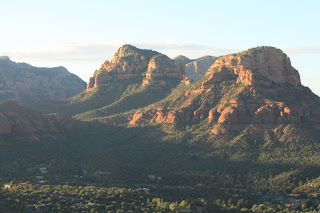 I made this dip for a Sangria party with my PT classmates and it was a big hit!  The roasted red peppers give the dip a ton of flavor, and served with pita chips, tortilla chips, or crackers, it is a delicious and crowd-pleasing appetizer!


Preheat oven on broiler setting.  While it is heating, wash your peppers.  Place peppers on baking sheet and once oven is heated, place peppers in oven.  Keep a close eye on your peppers, making sure they don’t burn, and after one minute, take the peppers out of the oven, turn them onto other side, then return to oven.  Once they are blistered on all sides, remove them from the oven.  Place the peppers in a paper sack or ziploc bag that can be sealed.  Let them sit for 15 minutes in the bag.


After 15 minutes, you can remove the peppers from the bag and the skin should easily be torn off.  Cut off stem and place red peppers in food processor, along with the rest of the ingredients.  Pulse until mixture is very smooth.  Transfer dip into serving bowl and serve with crackers, pita chips, or slices of baguette.  Enjoy!