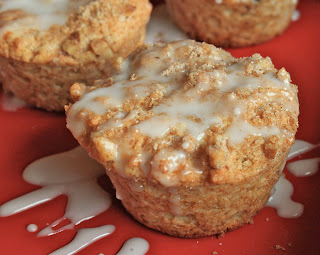 I don’t know about you, but I’m thinking it’s a muffin kind of a weekend.  You know, one of those weekends where you wake up whenever you feel like waking up and you want something homemade for breakfast, but don’t really feel like standing over the stove flipping pancakes or waiting 4 hours for cinnamon rolls to rise twice and then bake them for what seems like forever.  Especially after a fun-filled but exhausting 4th of July weekend, this is the type of weekend that obviously calls for staying in your PJ’s a little longer than usual and making muffins.  These muffins in particular.  They don’t even require you to go to the grocery store in your PJ’s because you already have everything you need to make them.  I promise.


The process of making these particular muffins is a little different than a typical muffin recipe.  First of all, the original recipe called for the entire process to be done in a food processor.  I don’t have a food processor big enough for something like this, so I used the trusty Kitchen Aid and they still turned out great.  The recipe has you start by making a pecan/brown sugar/cinnamon mixture first in the food processor (which can be done in a mini-processor).  Then you add part of this streusel mixture to the batter and part of it gets set aside and is combined with a butter mixture that you make in the second step.


Confused yet?  Don’t be.  It’s all vaguely very clearly explained in the directions and hey, at least you will be ready for the craziness.  I wasn’t.  In typical Taylor-fashion I went blindly into a recipe without reading the directions.  I’ll never learn.


So are you wondering why you would want to make a muffin recipe that involves a few extra steps?  Reason 1: these muffins are pretty spectacular.  I know that’s a bold word to use for muffins, but they’re seriously delicious.  Reason 2: Marc said they were the best muffins he’s ever had.  He even rated them as 11/10 on his scale.  Granted, he’s pretty easy to please but an 11/10?!  That’s saying something.  Reason 3: the muffins have a glaze.  That means you get to eat frosting for breakfast.  It’s a win. 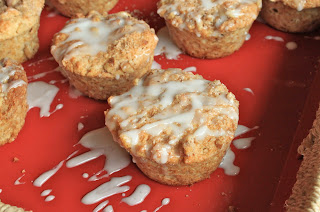 In small food processor, add pecans, brown sugar, and cinnamon, and pulse until nuts are coarsley ground, about 10 1-second pulses.  Transfer to small bowl and set aside.

In bowl with electric mixer, add flour, sugar, and salt and whisk until well combined.  Then add the slices of butter and beat until combined.  Remove 1/2 cup of the flour-butter mixture and add it into the bowl with the pecan-brown sugar mixture, and stir it with a fork until combined to make the streusel.  Set aside 3/4 cup of the streusel for the muffin batter and the remaining portion for topping the muffins.

Now, back to the bowl with the electric mixer.  Add the baking powder and baking soda and beat until combined.  Next, combine sour cream, egg, and vanilla, in a 1-cup glass measuring cup and whisk together, then add to mixer bowl and and beat until just combined.  Finally, add the 3/4 cup of streusel you set aside to the flour mixture and fold in with wooden spoon until evenly distributed.

Divide batter among the 12 muffin cups, then sprinkle with remaining streusel, pressing lightly into the batter.  Bake in preheated oven for 18-22 minutes, or until a toothpick comes out with a few crumbs clinging to it.  Allow muffins to cool in the tin for a couple of minutes, then loosen the muffins with a knife and remove them from the tin, placing them on a cooling rack for 5 minutes.

To make the glaze, whisk together the confectioners’ sugar and milk in a small bowl until smooth and spoon over the warm muffins.  Eat the muffins as soon as you can and enjoy!!