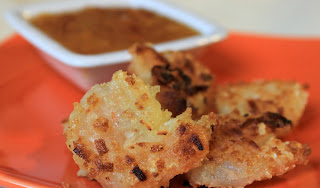 Remember last summer when I organized a bake sale to raise money for a service trip to the Dominican Republic?  Well, the time has finally come!  Saturday morning I leave Omaha and  will be working in a children’s hospital called “Los Ninos” for four weeks and providing physical therapy services to little kiddos who need it.  Sounds fun, right?!  I’m so stinkin’ excited I can barely stand it!

So what am I going to miss?  Well, Marc of course!  Also my family.  And cooking.  I can’t believe I’m not going to be using an oven or stove for four weeks.  This has to be a new record for me.  Don’t worry though, I’ve been cooking and baking up a storm the past couple of weeks to get my “fix” and also to have some yummy posts to post while I’m gone!

Speaking of yummy food, these shrimp are delicious!  I’ve had coconut shrimp on my mind ever since Marc and I went out to eat at Bonefish Grill (compliments of my dad…thanks dad!) to celebrate Match Day.  Since Bang Bang Shrimp is a no-brainer for an appetizer at Bonefish, we were torn on whether or not to get their Coconut Shrimp too.  We decided it was best for the sake of our stomachs not to get two appetizers, but the craving didn’t go away.  Naturally, I figured why not make it myself?

Since coconut shrimp isn’t complete with a good dipping sauce, I created an orange marmalade dipping sauce too.  It ended up better than I could have expected!  The shrimp were crispy and the sauce was sweet yet spicy.  Marc said the sauce was so good he wanted to drink it.  Don’t worry, he didn’t. 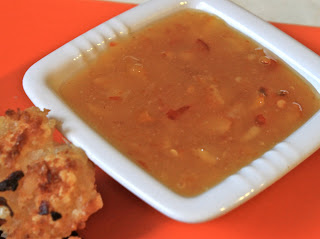 After shrimp is peeled, de-veined, and rinsed, pat dry with paper towel then sprinkle with salt.  Dip shrimp into cornstarch, then egg whites, then breadcrumb mixture.  Once all shrimp is coated, heat 1 tbs olive oil at a time over medium heat in medium skillet.  Cook shrimp in oil until well cooked, about 2-3 minutes on each side depending on the size of your shrimp.

To make the dipping sauce, mix all ingredients in small bowl.  Serve with coconut shrimp.