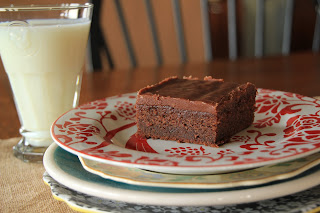 This post is for my Grandma Patsy, who passed away last week.

It’s for her sassiness and funky sense of style.

It’s for her letting my brother and I “make a mess” in her kitchen whenever we were little.

It’s for her fried chicken recipe that was so good it was mentioned in her obituary.

It’s for her endless supply of RC Cola.

It’s for all of the passes she sent for me while I was in middle school to get me out of class to talk and eat chips and dip. (She was my middle school’s Administrative Assistant)

This post is for her Coca-Cola cake, or as my brother calls it, her Coke cake.  It was one of her specialty desserts that was always such a treat.  The cake actually has Coca-Cola in it (though my grandma probably used RC Cola) and I don’t know what exactly that’s supposed to do in a cake but oh em gee is it delicious.  This cake is moist, dense, and insanely chocolatey.  In my opinion, the best chocolate cake ever.

Baked with love, just for you Grandma Patsy. 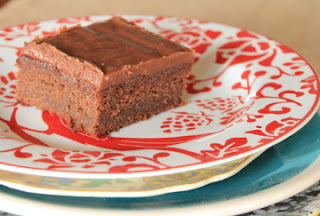 coca-cola cake (a.k.a. the best chocolate cake ever)