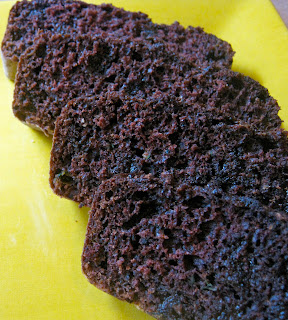 Let me just start this post by acknowledging that I know the pictures of this bread are less than stellar.  I actually almost didn’t post this recipe because even after 3 separate attempts to photograph it, I couldn’t get any decent pictures.  In my first set of photos the bread looked purple and in my second attempt the lighting just wasn’t right and the pieces of bread looked like brown blobs.  My last try still wasn’t a success but honestly, I’m sick of taking pictures of zucchini bread.  Plus, there’s only one piece left, which is soon going to turn into my afternoon snack so there won’t even be any more bread left.  I guess this is just a lesson learned that taking pictures of pieces of brown bread isn’t a strong point of mine.


It’s a shame I didn’t do this bread justice with the pictures because this bread deserves a good showing.  Even though it doesn’t look pretty, the bread turned out so good I couldn’t not post it just because of some silly pictures.  The combination of zucchini, chocolate, and cinnamon makes it a stellar quick bread recipe.  I also made it healthier by using low-fat plain yogurt instead of sour cream, and it was still perfectly moist.  So now, you have not one, but TWO zucchini recipes for the abundance of zucchini that has been showing up at every market recently.  Lucky you!


Butter and flour 9×5″ bread pan(I sprayed my pan with cooking spray, sprinkled it with flour, and turned the pan so the flour covered edges and bottom).  Combine topping ingredients in small bowl and set aside.


In larger bowl, beat the oil, brown sugar, white sugar, egg, and egg white with an electric mixer for 1 minute.  Add vanilla and yogurt and beat to combine.  Lastly, stir in grated zucchini and chocolate chips.


Pour into prepared bread pan, sprinkle on topping evenly,  and bake 45-55 minutes.  A tester (a knife in my case) should come out close to clean, but not completely clean or the bread will be too dry.