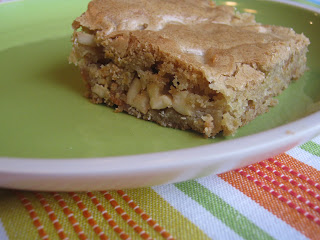 I’ve had a few baking fails lately and it has really taken a toll on my baking-confidence.  My first semi-fail was the underdone brownies.  It wasn’t a total fail because they tasted good and I know a lot of people like their brownies that way, but I still wasn’t really happy with them. 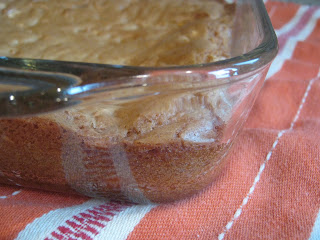 
Lastly, I had a second brownie fail.  I knew something seemed off when they smelled a little funny as I was mixing the batter, but I didn’t really think anything of it.  The taste-test verdict: not good…not even edible.  Marc described them as tasting like a mixture between chinese food and brownies.  We traced the ethnic tasting brownies back to an expired bottle of canola oil my aunt Penny had been keeping around for way too long. 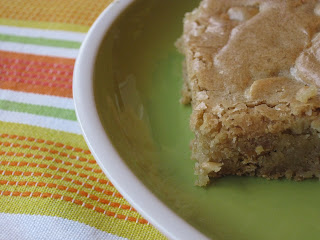 Finally, after one baking disaster after another we have a winner.  I’ve said it before and I’m going to say it again: I love blondies!  They can be whipped up in no time and are so versatile.  This time I made them with butterscotch chips and cashews, but if you remember back to my white chocolate cranberry orange blondies, there are so many options of what to put in blondies.


I have never baked with cashew before and I don’t know what took me so long.  They are one of my favorite nuts to snack on, and are so good in these blondies!  Paired with the butterscotch chips they are a great non-chocolate treat.  Of course, chocolate chips could be added if you must have your chocolate.


I have to warn you, now that I’m back in baking mode, be ready for some sugar-licious recipes coming next week!


In larger bowl, whisk together the melted butter and sugars until well combined.  Add the egg, the yolk and the vanilla and mix to combine.


With wooden spoon, mix in the flour mixture and stir until combined.  Fold in the butterscotch chips and cashews.


Scrape batter into prepared pan.  Bake for 30 minutes, or until the top is golden brown and a toothpick comes out clean.