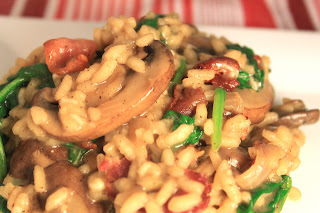 Cooking for Marc is one of my absolute favorite things to do, but it also comes with some limitations.  No capers, no orzo, and no mushrooms.  Capers aren’t that big of a deal since they’re not used in a lot of dishes.  Orzo…well it’s just a strange thing that he refuses to eat but I deal with it.  It’s the mushrooms that have been the most difficult for me to not cook with.  Lucky for Marc, I love him more than I love mushrooms so I haven’t cooked with mushrooms for months.

Marc had to go away this week for a few days to interview for residency and of course I was sad he was going to be gone, but I also jumped at the chance to cook with mushrooms.  When I saw this recipe in Cooking Light, I couldn’t wait to make it.  Mushrooms and bacon?!  AND cheese??  I’m in.  Plus, there is spinach in it which means it’s practically health food.

This recipe is truly a keeper.  All of the ingredients worked together so well, with the salty bacon, creamy rice, and of course the mushrooms.  I ate it as my meal but it would also be great as a side dish with chicken or fish.  I probably could have halved the recipe since I’m the only one that will be eating the leftovers, but I have a feeling if I make Marc try it, even he will be a fan.  Don’t tell him, but this is the first part of my “Convert-Marc-into-a-Mushroom-Lover” plan. 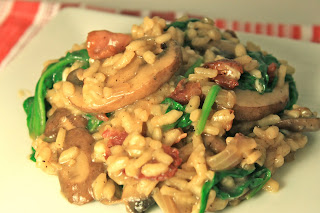 In small saucepan, bring chicken broth to a simmer and keep warm over low heat.

In a large French oven, cook bacon over medium heat for 8 minutes or until crisp.  When cooked, remove bacon from the pan with a slotted spoon.  Add the onion and garlic to drippings in pan and cook until onion is translucent, about 5 minutes.  Stir in the mushrooms and cook 5-6 more minutes, stirring occasionally.

Add the rice and cook 1 minute, stirring constantly.  Add the sherry and cook until it is nearly absorbed, about 1 minute.  Add 1 cup of chicken broth and cook 3-4 minutes, or until it is nearly absorbed. Add the remaining broth 1/2 cup at a time, stirring constantly until each addition is absorbed before adding the next.  Once all broth is added and absorbed, add the spinach and stir until it has wilted, about 1 minute.

Remove the pot from heat and stir in cheese, salt, and bacon.  Top with additional cheese, if desired.  Enjoy!